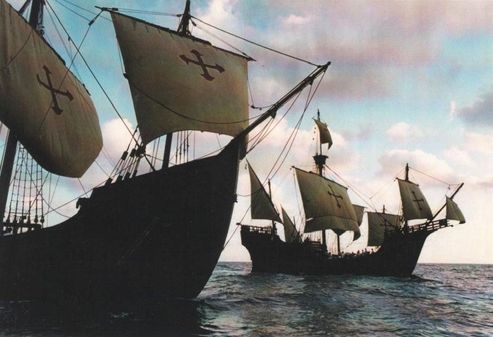 On the evening of August third 1492, Columbus departed from Palos de la Frontera with three ships;

Of the three ships, only the Santa Maria was built with a deck, and it was a much slower, heavier ship, with a keel that was about 115-feet long (35 meters). Both Nina and Pinta were about 50 feet long (15 meters). All three ships were armed. The Nina sailed under Vicente Yanez Pinzon, and the Pinta sailed under his brother, Martin Alonso Pinzon.

The Santa Maria had three masts (fore, main, and mizzen), each of which carried one large sail. The foresail and mainsail were square; the sail on the mizzen, or rear, mast was a triangular sail known as a lateen. In addition, the ship carried a small square sail on the bowsprit, and small topsail on the mainmast above the mainsail.

The Pinta was captained by Martín Alonso Pinzón, a leading mariner from the town of Moguer in Andalucia. Pinta was a caravel, a smaller, lighter, and faster ship than the tubby Santa Maria. We don't know much about Pinta, but it probably was about 70 tons. Philips puts the length of Pinta at 17 meters, keel length 13 meters, beam 5 meters, and depth 2 meters. She probably had three masts, and most likely carried sails like those of Santa Maria, except for the topsail, and perhaps the spritsail.

Smallest of the fleet was the Niña, captained by Vicente Añes Pinzón, brother of Martín. The Niña was another caravel of probably 50 or 60 tons, and started from Spain with lateen sails on all masts; but she was refitted in the Canary Islands with square sails on the fore and main masts. Unlike most ships of the period, Niña may have carried four masts, including a small counter-mizzen at the stern with another lateen sail. This would have made Niña the best of the three ships at sailing upwind. Philips puts her length at 15 meters, keel length 12 meters, beam 5 meters, and depth 2 meters.
Next
Powered by