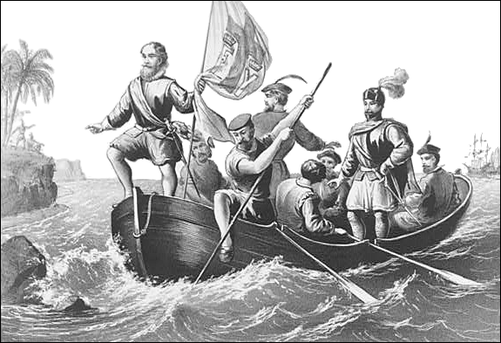 A lookout on the Pinta, Rodrigo de Triana (also known as Juan Rodríguez Bermeo), spotted land about 2:00 on the morning of 12 October, and immediately alerted the rest of the crew with a shout. Thereupon, the captain of the Pinta, Martín Alonso Pinzón, verified the discovery and alerted Columbus by firing a lombard. Columbus later maintained that he himself had already seen a light on the land a few hours earlier, thereby claiming for himself the lifetime pension promised by Ferdinand and Isabella to the first person to sight land.

Columbus called the island (in what is now The Bahamas) San Salvador; the natives called it Guanahani. Exactly which island in the Bahamas this corresponds to is unresolved. Based on primary accounts and based on what one would expect based on the geographic positions of the islands given Columbus's venture's course, the prime candidates are San Salvador Island (so named in 1925 on the theory that it was Columbus' San Salvador), Samana Cay, and Plana Cays.

The indigenous people he encountered, the Lucayan, Taíno, or Arawak, were peaceful and friendly. Noting their gold ear ornaments, Columbus took some of the Arawaks prisoner and insisted that they guide him to the source of the gold.

From the 12 October 1492 entry in his journal, in which he wrote of them, "Many of the men I have seen have scars on their bodies, and when I made signs to them to find out how this happened, they indicated that people from other nearby islands come to San Salvador to capture them; they defend themselves the best they can. I believe that people from the mainland come here to take them as slaves. They ought to make good and skilled servants, for they repeat very quickly whatever we say to them. I think they can very easily be made Christians, for they seem to have no religion. If it pleases our Lord, I will take six of them to Your Highnesses when I depart, in order that they may learn our language."

Five centuries after his daring voyage to the Americas, Christopher Columbus remains as famous as he might have hoped. He's just not as popular as he might have hoped. Though Columbus is undoubtedly one of history's great mariners, recent years have seen much squabbling over whether he was a good-guy hero who discovered new worlds, or a not-so-nice guy who helped grab the Americas from their native inhabitants. Financed by Ferdinand of Aragon and Isabella of Castille, Columbus sailed across the Atlantic in search of a sea passage to India. His mission was twofold: open trade routes for exploitation and bring the word of Jesus Christ to the uninitiated. In 1492 he sailed with three ships (Niña, Pinta and Santa Maria) and made landfall somewhere in the Bahamas. He made three more voyages, always believing that he had reached Asia. Columbus' success opened the door for Spain to conquer the Americas.