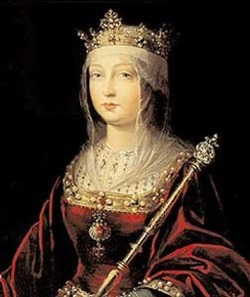 In 1485, Columbus presented his plans of crossing the Atlantic to John II, King of Portugal. He proposed that the king equip three sturdy ships and grant Columbus one year's time to sail out into the Atlantic, search for a western route to the Orient, and return.

Columbus also requested he be made "Great Admiral of the Ocean", appointed governor of any and all lands he discovered, and given one-tenth of all revenue from those lands.

The king submitted Columbus' proposal to his experts, who rejected it. It was their considered opinion that Columbus' estimation of a travel distance of 2,400 miles (3,860 km) was, in fact, far too low.

In 1488, Columbus appealed to the court of Portugal once again, and once again, John II invited him to an audience. That meeting also proved unsuccessful, in part because not long afterwards Bartolomeu Dias returned to Portugal with news of his successful rounding of the southern tip of Africa (near the Cape of Good Hope). With an eastern sea route to Asia apparently at hand, King John was no longer interested in Columbus's far-fetched project.

Columbus traveled from Portugal to both Genoa and Venice, but he received encouragement from neither. Columbus had also dispatched his brother Bartholomew to the court of Henry VII of England, to inquire whether the English crown might sponsor his expedition, but also without success.

Columbus had sought an audience from the monarchs Ferdinand II of Aragon and Isabella I of Castile, who had united many kingdoms in the Iberian Peninsula by marrying, and were ruling together. On 1 May 1486, permission having been granted, Columbus presented his plans to Queen Isabella, who, in turn, referred it to a committee. After the passing of much time, the savants of Spain, like their counterparts in Portugal, replied that Columbus had grossly underestimated the distance to Asia. They pronounced the idea impractical and advised their Royal Highnesses to pass on the proposed venture.

However, to keep Columbus from taking his ideas elsewhere, and perhaps to keep their options open, the Catholic Monarchs gave him an annual allowance of 12,000 maravedis and, in 1489, furnished him with a letter ordering all cities and towns under their domain to provide him food and lodging at no cost.

After continually lobbying at the Spanish court and two years of negotiations, he finally had success in January 1492. Ferdinand and Isabella had just conquered Granada, the last Muslim stronghold on the Iberian Peninsula, and they received Columbus in Córdoba, in the Alcázar castle. Isabella turned Columbus down on the advice of her confessor, and he was leaving town by mule in despair, when Ferdinand intervened. Isabella then sent a royal guard to fetch him, and Ferdinand later claimed credit for being "the principal cause why those islands were discovered".

About half of the financing was to come from private Italian investors, whom Columbus had already lined up.